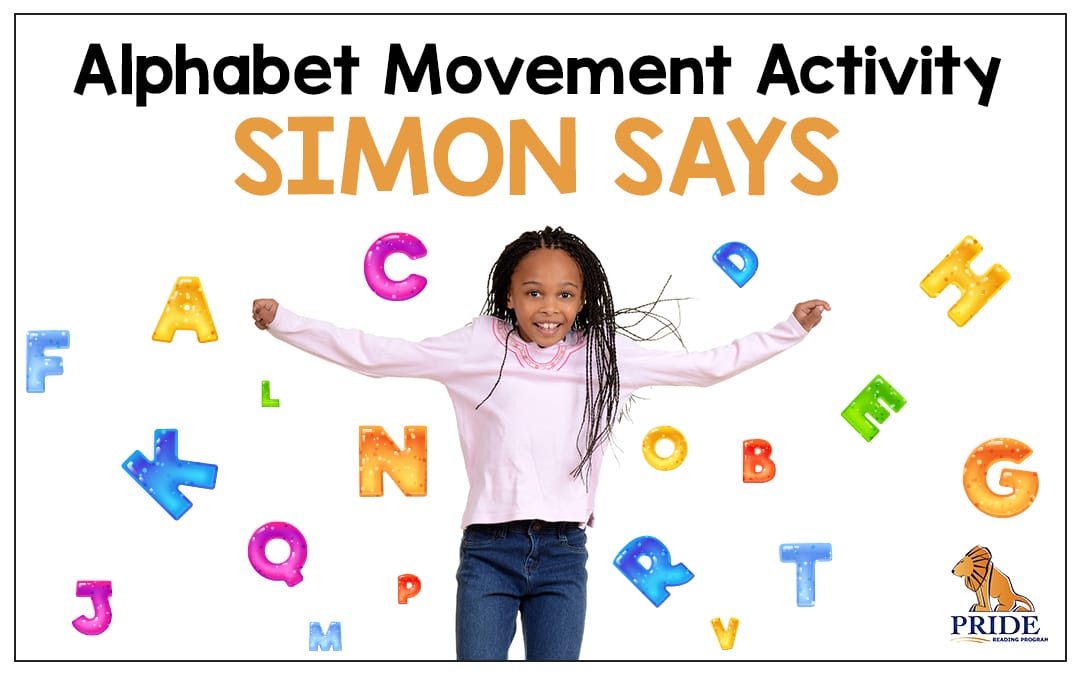 It is so easy to practice basic alphabet skills when you play a multisensory, hands on game. On today’s post, I am going to share with you a really fun alphabet movement activity called Simon Says. Playing the game Simon Says really helps kids pay attention, learn letter recognition and most importantly…incorporate fun movement into learning.

To prepare for this alphabet movement activity, write each target letter on a large index card.

Place the index cards face up on a table or on the floor so that the student can easily see them and grab them when needed. You can start out by putting the letters in alphabetical order and then eventually mixing them up.

This alphabet movement activity is best played in small groups or 1:1.

One person is the designated Simon, the others are the players. Standing in front of the group, Simon tells players what they have to do. The player must only obey commands that begin with the words, “Simon Says.”

Those who do touch it are out.

If you are Simon, the object of the game is to try to dupe the players to follow your commands when they shouldn’t.

Simon Says jump up and down holding the letter j.

Simon Says hop on one foot holding the letter t.

Simon Says hop on the other foot holding the letter b.

Simon Says touch the letter p with you pinky finger

Simon Says place the letter f on the floor.

Simon Says place the letter d on your shoe.

Simon Says pick up the letter l with your left hand

Pick up the letter r with your right hand (uh oh)

Simon Says skip around the room holding the letter s

Simon Says pat the letter b

Simon says wave the letter h in the air.

Simon Says touch the letter g with your thumb.

Throw the letter k in the air. (uh oh)

As the student’s letter knowledge grows, the number of letters used in the game can grow too.

I Have a Resource for You!

I hope that you enjoy playing this alphabet movement activity with your student. You might also enjoy reading my previous posts:

How to Teach Letters and Sounds

How to Teach Rhyming

Karina Richland, M.A., is the author of the PRIDE Reading Program, a multisensory Orton-Gillingham reading, writing and comprehension curriculum that is available worldwide for parents, tutors, teachers and homeschoolers of struggling readers. Karina has an extensive background in working with students of all ages and various learning modalities. She has spent many years researching learning differences and differentiated teaching practices. You can reach her by email at info@pridereadingprogram.com or visit the website at www.pridereadingprogram.com
Pin243
Share23
Tweet
266 Shares